A Night of Poetry with Krystyna Dąbrowska + Ghayath Almadhoun 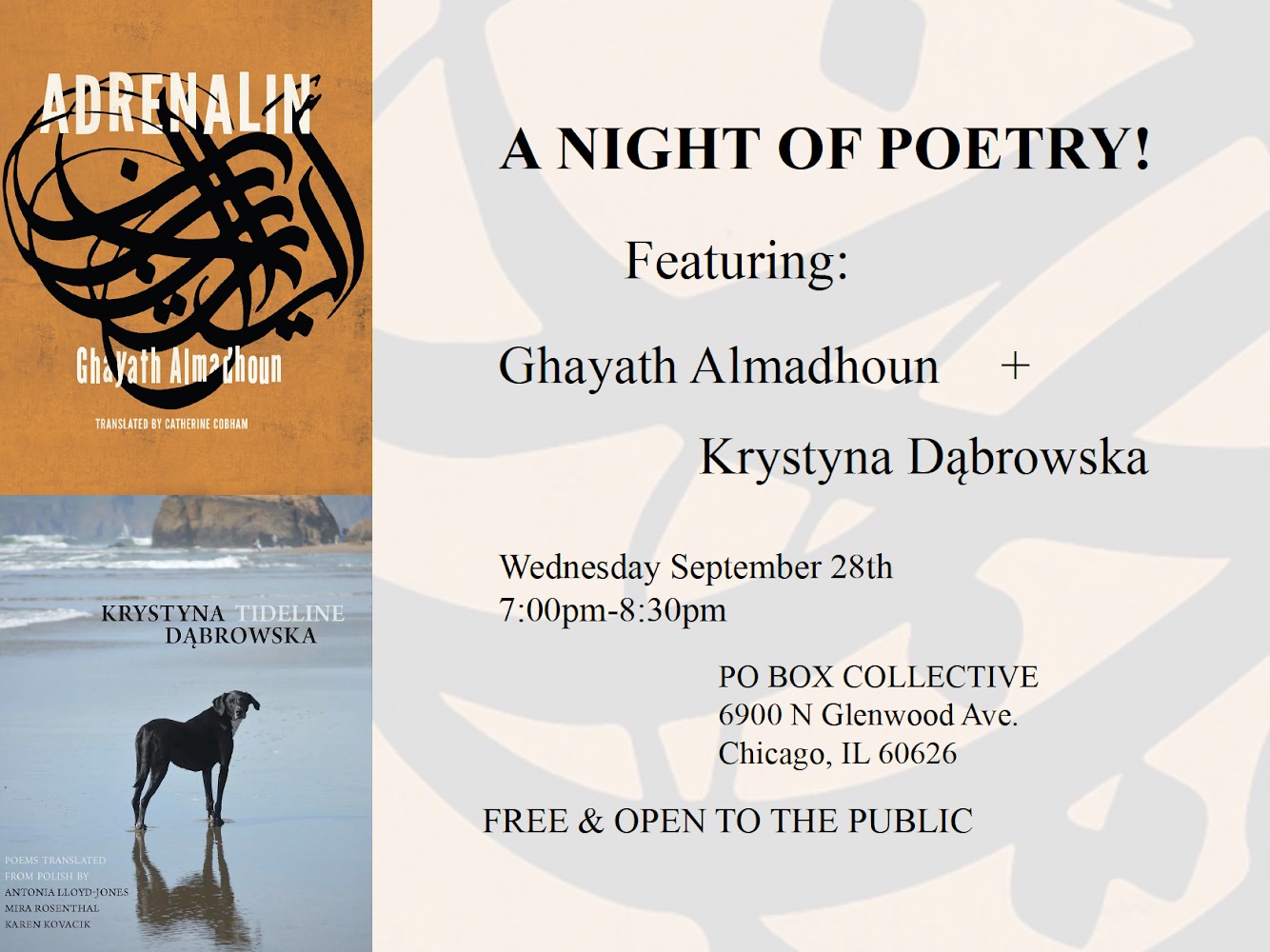 Please join us for a special night of poetry featuring visiting writers Krystyna Dąbrowska and Ghayath Almadhoun. Dąbrowska’s collection Tideline has recently been translated from Polish to English and is now out from Zephyr Press (link: https://www.zephyrpress.org/product-page/tideline). Almadhoun’s collection Adrenalin was translated from Arabic to English in 2017—out from Action Books (link: https://actionbooks.org/ghayath-almadhoun-adrenalin/). We are excited to host this sure-to-be lively reading and conversation!

Krystyna Dąbrowska is the author of four books of poetry, as well as essays and translations, and the winner of two of Poland’s most prestigious literary prizes, the Wisława Szymborska Award and the Kościelski Award. English translations of her work have been published in numerous U.S. literary journals, including Harper’s, The Harvard Review, The Brooklyn Rail, The Los Angeles Review, and elsewhere, and she has been translated into sixteen other languages. She lives and works in Warsaw, Poland.

Ghayath Almadhoun is a Palestinian poet born in Damascus in 1979 and immigrated to Sweden in 2008. Right now he lives in between Berlin & Stockholm. Almadhoun has published four collections of poetry, the latest “Adrenaline” in Milano 2017. In Sweden, he has been translated and published in two collections: Asylansökan (Ersatz, 2010), which was awarded the Klas de Vylders stipendiefond for immigrant writers. He also authored Till Damaskus (Albert Bonniers Förlag, 2014) together with the Swedish poet Marie Silkeberg. which was included in “Dagens Nyheter” (the largest Swedish newspaper) literary critic list for Best New Books and converted to a Radio Play for Swedish National Radio. With Silkeberg, Almadhoun has also made several poetry films. His work has been translated into Swedish, German, Greek, Slovenian, Italian, English, Dutch, French, Spanish, Czech, Croatian, Albanian, Lithuanian, Indonesian, Macedonian, Bengali, Persian, Hindi, Maltese, Hebrew, and Chinese. (Website: https://www.ghayathalmadhoun.com/)