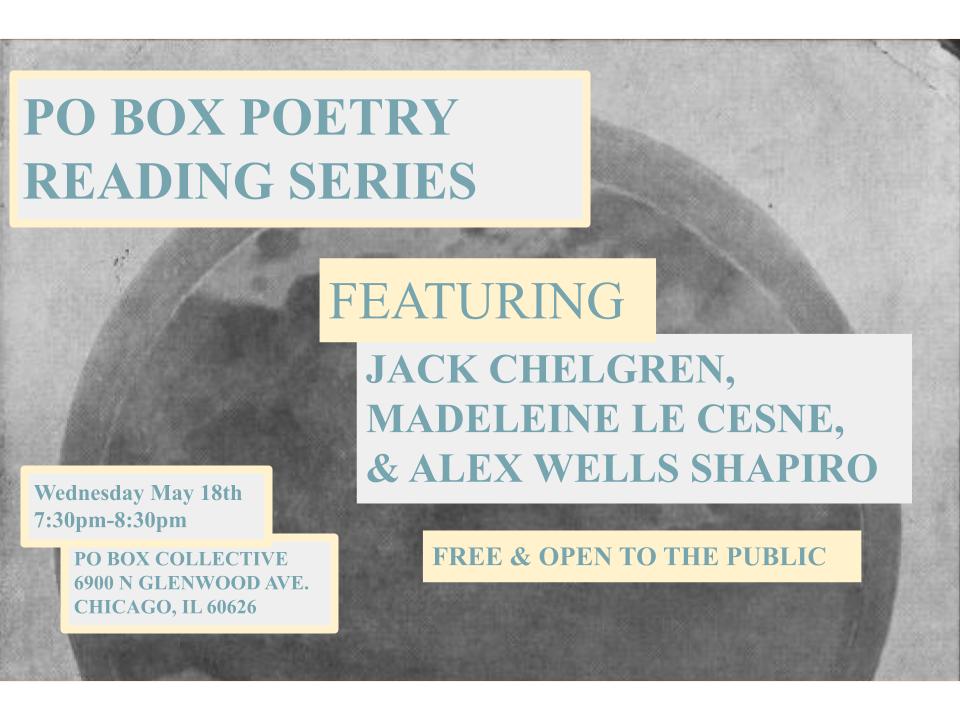 Jack Chelgren will be reading from his book-length narrative poem The Spite House. Chelgren says of The Spite House, “The story follows a disaffected young delivery driver named Rick as he grapples with family trauma, dysfunctional friendships, and the pitfalls of trying to be a class traitor in the early 2010s.” While Alex Wells Shapiro plans to read from his recent collection Insect Architecture as well as new work. Shapiro says of his poetry, “Both the book and the newer poems depict spaces where literal, physical intersectionality occurs, spaces where capitalist class segregation is somewhat thwarted by sheer density, by broad unifiers such as proximity and circumstance. While my lens has slowly zoomed in on more intimate/immediate communities coming off of a collection that is very much zoomed out, my focus remains drawn to my generation’s epochal anxieties, including fragmenting culture and lifestyles, immense economic inequity, perpetual interaction digitally on a global scale, and rapidly escalating climate change.”

It will be an ecstatic evening of poetry and conversation. We hope you (yes, you!) will join us for it—

This series aims to give time and space to poets living in Chicago especially to those living in, or having connections to, the Rogers Park area. It is hosted and organized by Smith “S.” Yarberry—and will take place the third Wednesday of each month.

Jack Chelgren is a writer from Seattle now living in Chicago. He is an editor at Chicago Review and a PhD student in English at the University of Chicago. Recent poems have appeared in Blush and ‘Pider; new work is forthcoming in Bedfellows.

Alex Wells Shapiro (he/him) is a poet and artist from the Hudson Valley, living in Chicago. He serves as Business and Grants Manager for Another Chicago Magazine and co-curates Exhibit B: A Reading Series presented by The Guild Literary Complex. His poems are recently published or forthcoming in Fourteen Hills, Fatal Flaw, The Under Review, and Cleaver. When he’s not writing, Alex works as an organizer and high school track coach. His debut poetry collection, Insect Architecture, is available now from Unbound Edition Press.